The Development of Tattoos in China

Talking about the development of tattoos in China.

The public acceptance of tattoos is getting higher and higher, and their aesthetic orientation is becoming more and more diverse. In recent years, the tattoo industry has developed rapidly, and various new styles and new forms of expression have emerged at a historic moment. The traditional model of industry development is also changing in silence.

The diversity and tolerance of tattoo aesthetics determine the development trend of it.

If you know early tattoos, you must know the “Four Great Beasts” of tattoos, which are:  fish tattoo over the shoulder, scorpion tattoo between the thumb and index finger, bloody wolf head tattoo, and monkey tattoo. If we analyze the reasons for its popularity, we need to combine the background of the times and the film and television works at that time.

In 1996, the first part of the series of “The Young and  Dangerous” was broadcasted on the mainland immediately. The classic style in the play became a model for the young people to follow suit. Prior to this, there were not too many works related to penetrating the tattoo. From the perspective of now, the poor tattoos of Chen Haonan, Chen Xiaochun and others continued to affect people’s aesthetics for a long time at that time. 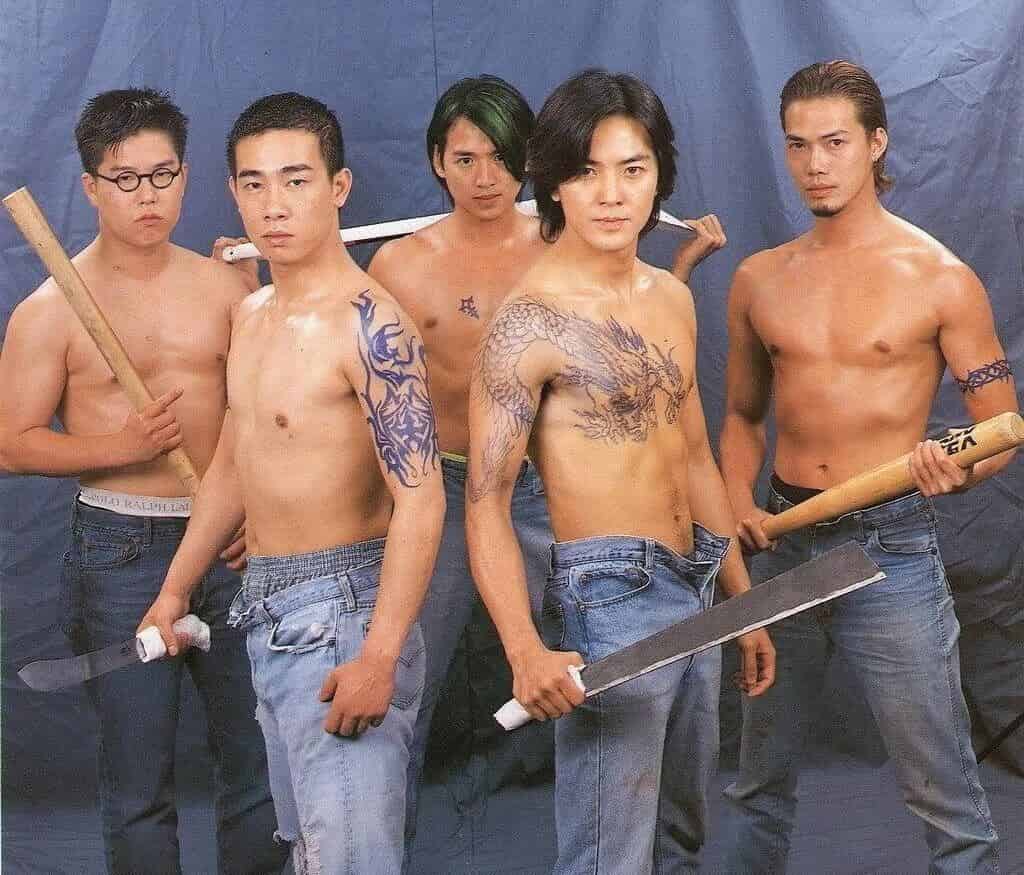 Immediately after the advent of the film and television work “Demi-Gods and Semi-Devils” in 1997, the character Qiao Feng in the play was a Khitan. The book said that the wolf-head tattoo is a unique symbol of the Khitan. The bloody wolf head on Qiao Feng’s chest once again ignited the blood of the young people at that time, how surging the moment the clothes were torn apart! However, due to the limited access to information in those days, the sudden influx of information after a long period of occlusion made it impossible for people to distinguish between good and bad in a short period of time. This created a situation in which the culture was open but unmatched. Qiao Feng! If you are not a Khitan, why do you have a wolf head tattoo on your chest? 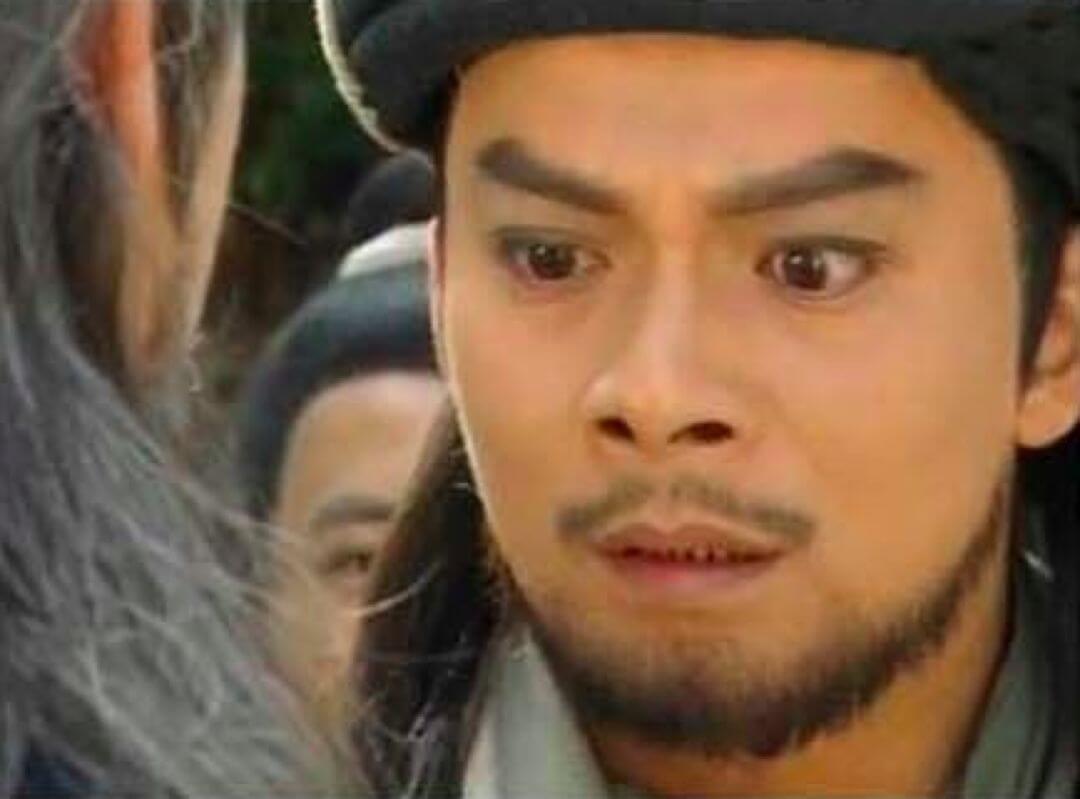 Similarly, as an iconic tattoo,  scorpion, although it seems difficult to say beautifully now, there are certain social factors that make it popular. An elder tattoo artist once told me a story that when he was in need of practice soon after he first entered the industry, at a certain evening, a few migrant workers came to the store and asked for a scorpion tattoo between the thumb and index finger and they only paid 100 RMB. After so many attempts to persuade in vain, he was finally forced to tattoo for them. In the process of writing, they asked why they had to tattoo a scorpion at this place. They answered roughly that as a worker at the bottom of the society and a migrant worker, they are always bullied. Because he is engaged in manual work and his hands are exposed for a long time, he wants to show a fierce scorpion in his hand to show his fierceness, thereby increasing morale and avoiding some troubles. 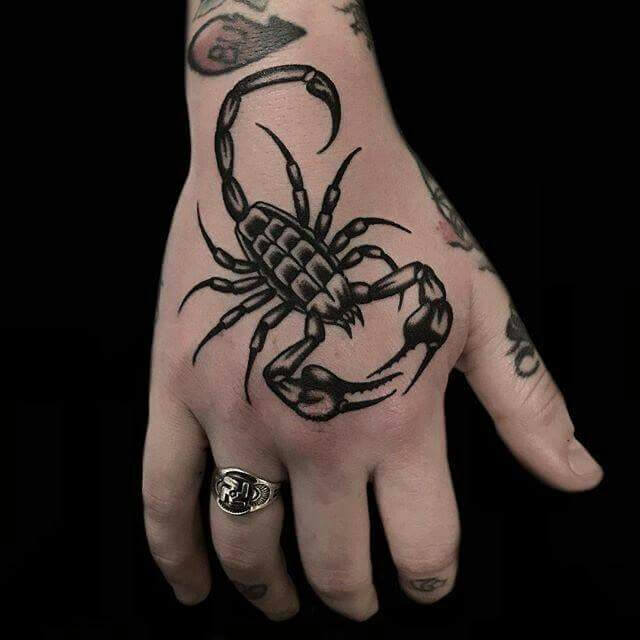 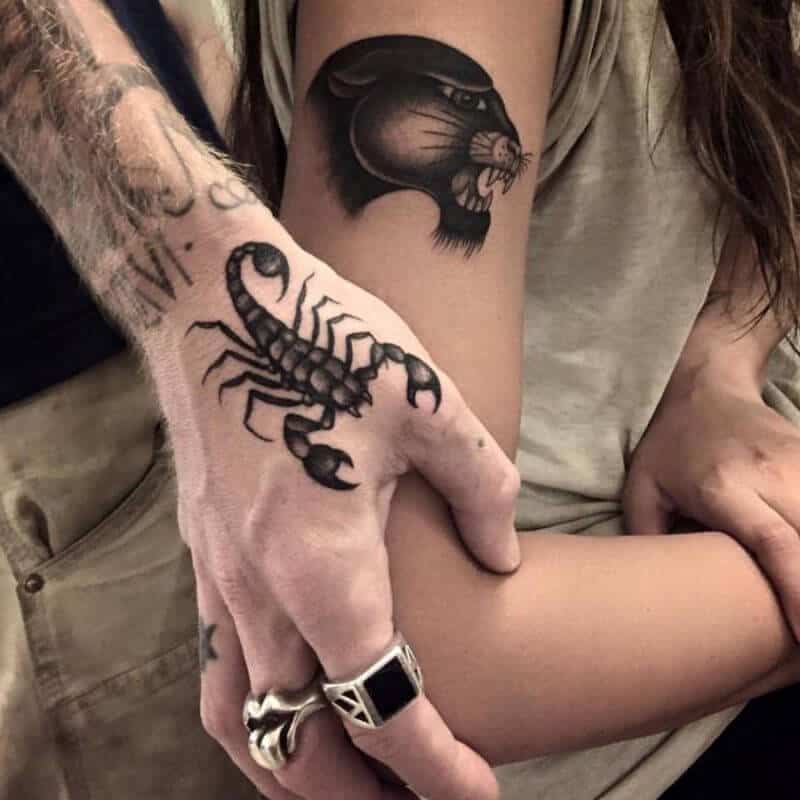 Grosse said in the book “The Origin of Art”: “The warriors of Boto Kudo, when they painted their bodies in dark blue, were never to imitate natural objects, but just to make themselves the most special. It ’s weird, so as to cause the enemy ’s horror psychology. ”From this, we can see that the development of tattoo culture has not yet shed its other functional role, namely“ primitive war needs ”, except for the function of aesthetic decoration. Although this example cannot be generalized, it can still explain some questions.

The early tattoo works in China were deeply influenced by the oriental traditional types in Hong Kong and Taiwan (we can also be said to be deeply influenced by the Japanese traditional style here), and most of them revolved around themes such as dragon, tiger, fish, and traditional characters. Around 2000, through the continuous exploration and accumulation of the earliest domestic tattoo practitioners, traditional style tattoo works became more and more mature, and it was this group of people who became the founder of the Chinese tattoo industry and also the mainstay of China. Tattoos are the banner of the world, and with the rise of the Internet industry, Chinese tattoo culture has entered the next stage. The rise of the Internet industry has directly pushed niche culture or individuals into the mainstream. The channels for the masses to receive information have been enriched, and they have a relatively selective ability. People have seen that tattoos are not just big dragons and big phoenixes. The popularity of Chinese tattoos in foreign cultures has long been commonplace. The exchange of tattoo culture platforms at home and abroad and the influx of fresh styles have directly affected the rise of the domestic tattoo industry, and the deep-rooted thinking patterns that traditional style tattoos have long caused to the public have slowly dissolved.

As more and more professional art classes enter the tattoo industry, creating unlimited possibilities for tattoo culture, to a certain extent, it has changed the public’s understanding of tattoos, redefining the form and aesthetic standards of tattoos so that Tattoo takes another step towards the direction of tattoo art. The ability of celebrities to lead the public’s aesthetic cannot be underestimated. The effect of the series “Young and Dangerous” at that time was also a star effect, but it added a lock to the connection between the tattoo and the “ground ruffian rogue”. Since the development of tattoo culture, the so-called “small and fairy” style that is generally accepted by everyone is actually influenced by the trend culture of Japan and South Korea. More and more stars have made their tattoos public in the form of trend culture. It further dissolves people’s prejudice against the tattoo. Tattoos can become small and exquisite, you can use any way to highlight your own personality, breaking the traditional style of tattoos on the work of the constraints of the work, so that the tattoo art into the next dimension. Tattoos are closer to art, and the materials of tattoo works are more and more extensive, and the presentation methods are more and more diverse. The factors driving this process are inextricably linked to the improvement of the audience’s acceptance, and the higher acceptance is closely related to the improvement of the audience’s aesthetic level. But it is worth noting that the higher the acceptance level, it only shows that more and more people are willing to go to the tattoo, and the behavior they want to go to the tattoo can be largely unimpeded by external factors, does not mean that the public The industry has a basic understanding, and it turns out that there are still many misunderstandings. Due to some characteristics of the industry, the public’s misunderstanding of tattoos cannot be digested in a short time.

The youth group loves tattoos, as much as sneakers. Most of them are for good-looking and pursuing the so-called trend. Good-looking is only one aspect. Should we pay more attention to the culture and connotation behind it? This is worth reflecting on. But fortunately, the youth group’s understanding of beauty has improved greatly compared to the past. The overall improvement of the aesthetic level will affect those rough tattoo shops, which indirectly helps to purify the interior of the industry. It’s terrible. The overall improvement of the audience’s aesthetic level is crucial, and he directly affects the future development trend of the tattoo industry. 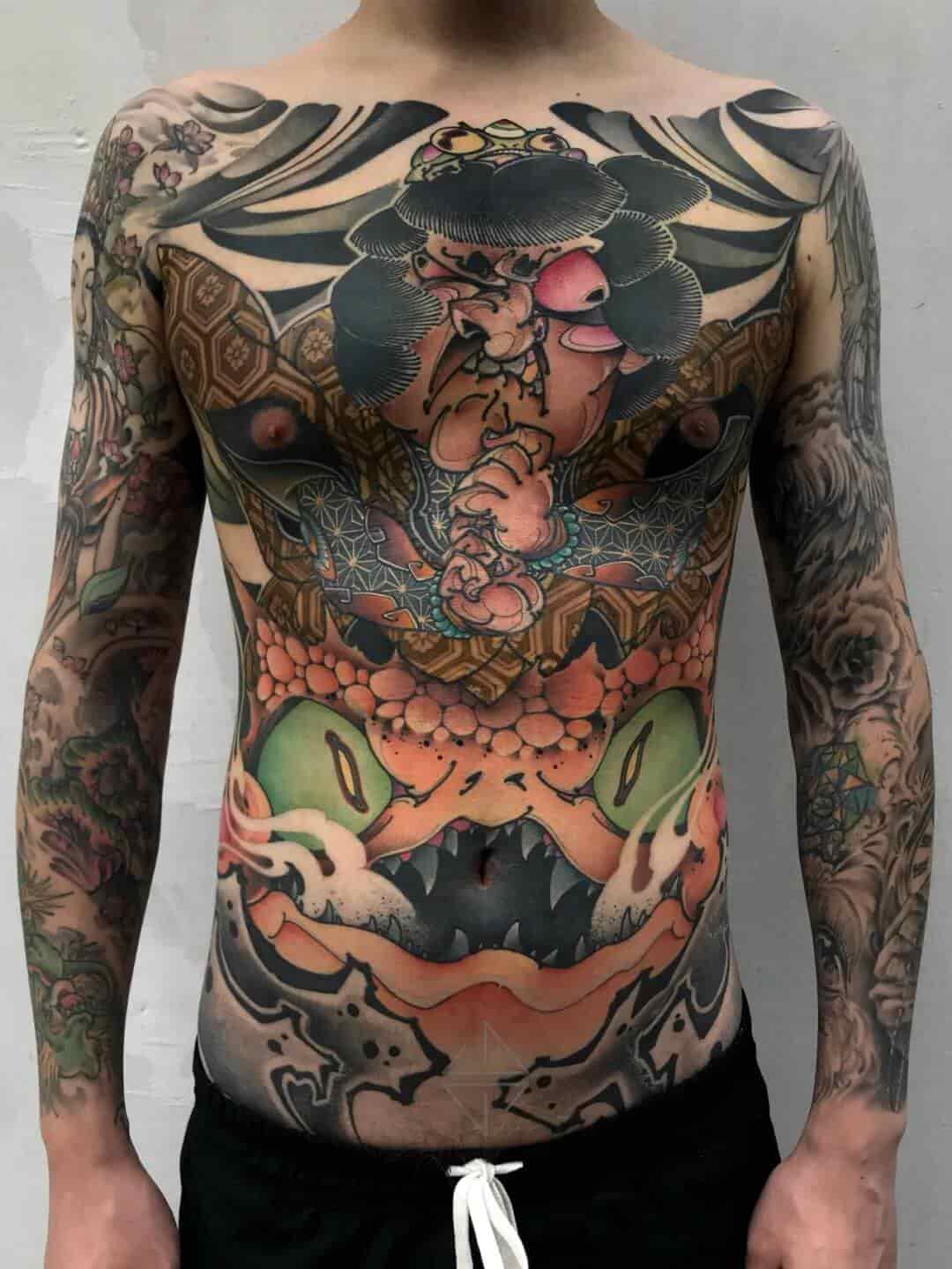 With the emergence of a group of individual tattooists with new styles that cannot be categorized, the core competitiveness of the tattoo industry will be the first in originality and stylization, not just sticking to the tattoo skills themselves. We can’t comment on the quality of many works, which may be nonsense in the eyes of most old-school tattooists. It is undeniable that their audience is there, and it is not a minority. It is not difficult to find that these tattooists are mostly graduated from higher art schools. Everyone has a unique perspective on art. Compatibility and inclusion are the foundation of development. 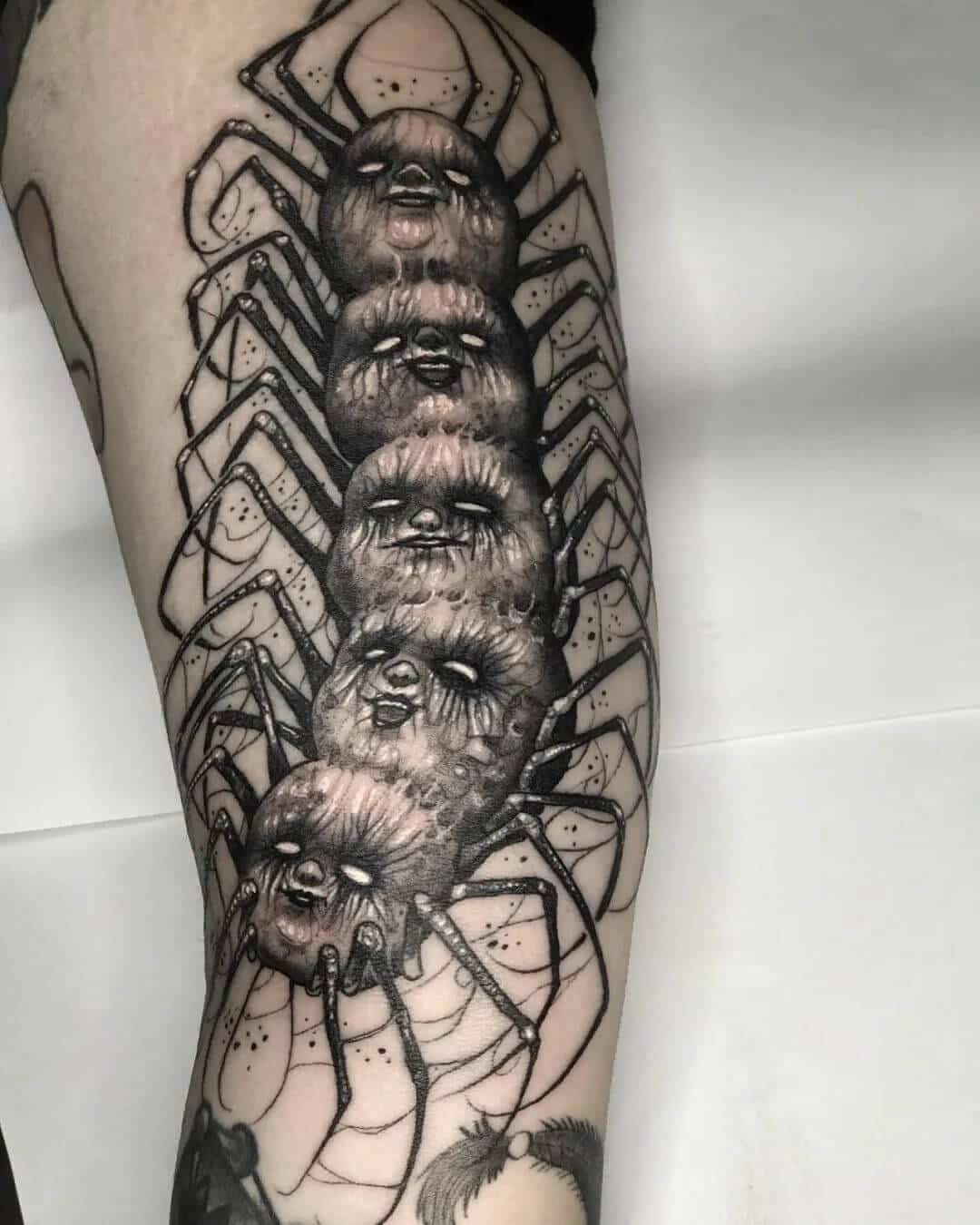 In the past, a tattooist who wanted to be recognized by the industry would go to a tattoo exhibition, get a good rank in the exhibition, and be recognized by those senior tattooists. This model may be considered professional in some respects, but he may not be beautiful. Tattoo exhibitions are undoubtedly a good communication platform, but in recent years there have been more and more doubts about the credibility of various exhibitions. In any case, if one can still judge a work by objective conditions, he may not be good. Quoting a point in Mr. Galt?s “On Beauty” “Beauty is subjective, and it is human’s spontaneous evaluation of things.” Just like “a thousand Hamlet in a thousand readers”, any form of beauty has its rationality of existence, so inclusiveness determines the height of development. If the standard for judging the quality of a tattoo in the past is to see its solid track and uniform matte surface, then the proportion of stab gong will be gradually diluted in the future, and it is bold to predict that the form of using tattoo exhibition as the criterion The reason for the impact is that the public’s understanding of the tattoo tends to be very strong in personal style, and the understanding of beauty is also more profound. By observing every node that promotes the development of tattoo culture, it is not difficult to find that they all have one thing in common, namely “accept different voices”. At any time, steadfastness will not be a factor of progress, and compatibility is the eternal truth. In fact, the development of art and culture is originally a process of transformation from figurative to abstract, just like writing has developed from hieroglyphs until now, from simple to complex. The emotions that can be expressed by figuration are limited, but abstract expressions can be given more levels of meaning. This is not difficult to understand, if tattoo as an artistic language, then the current development is his necessary stage. But no matter how it is presented, there should be no distinction between high and low. 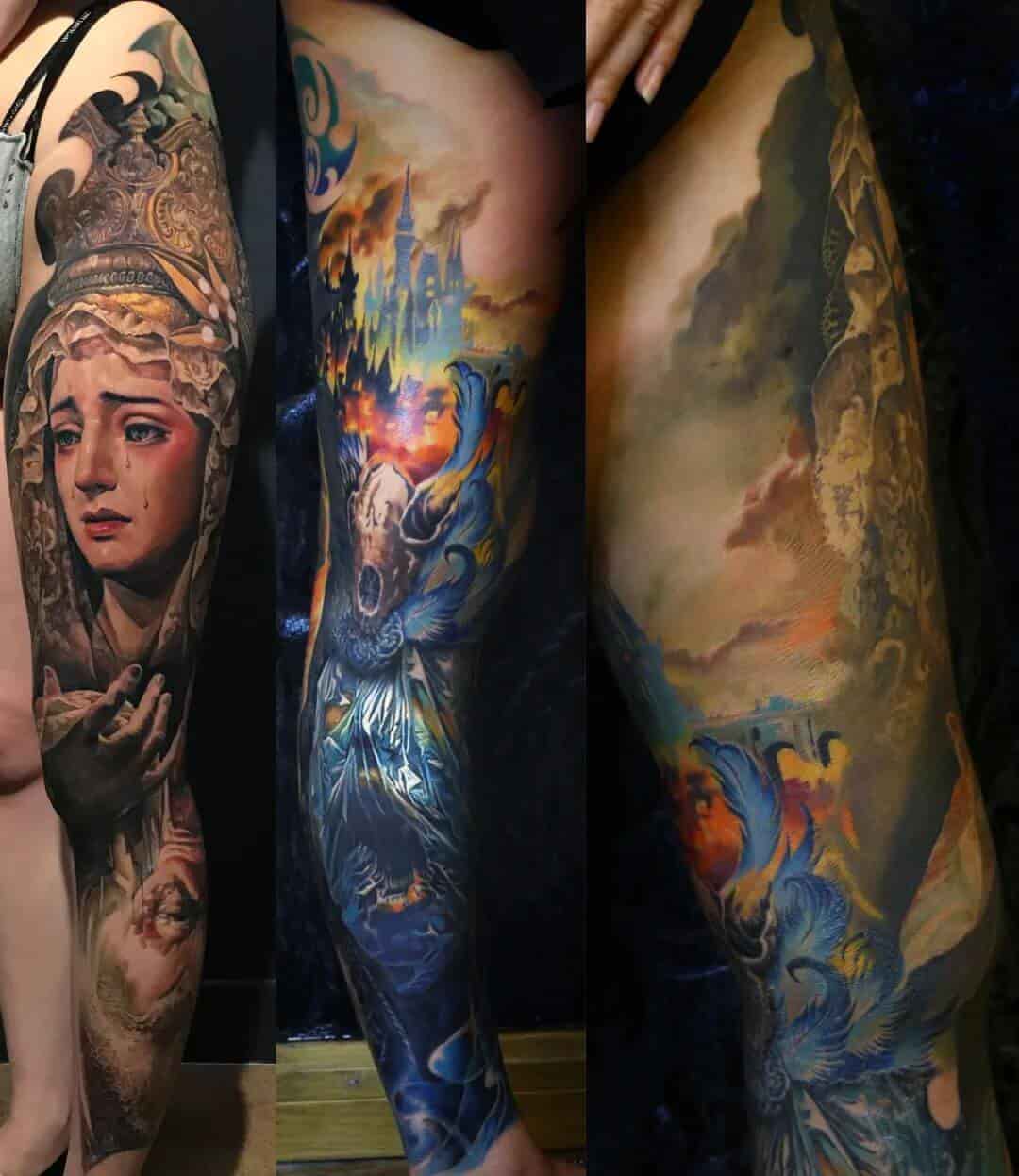